Thursday, November 7, 2019
You’d think if you’d met the creator of Star Trek, Gene Roddenberry, in the flesh you’d remember it.

Especially if he told you the real reason he made Mr. Spock look a little … devilish (about 32:17 in). 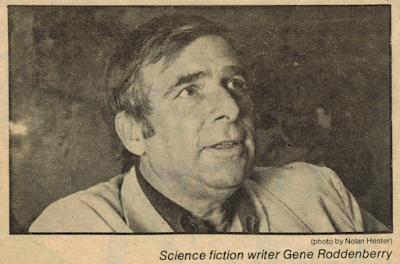 Well, I did meet him, and he told me that—and I confess that I forgot all about it.

Only when a longtime friend and neighbor lent me a vintage reel-to-reel tape player and I opened a long-filed-away box labeled “Gene Roddenberry” did I recall that I was actually in a studio with Roddenberry at college radio station WPGU in 1974—a half-decade after the original TV show had been canceled and a half-decade before the first Star Trek movie was to debut in theaters. (Photo: Roddenberry in 1974 by Nolan Hester for The Daily Illini.)

Not only that, but I got him to autograph a book, which sat on my shelf forgotten and unloved for years.

Here’s how it sounded, Nov. 7, 1974: A long-unheard interview with the visionary Gene Roddenberry, hosted by Phil Robinson with help from Jim Gassel, Bill Taylor, a so-young-and-nerdy-you-could-plotz 19-year-old Charlie Meyerson and a bunch of call-in fans.


Bonus 1: Keep listening past the end of that show and you’ll hear my second Roddenberry encounter—raw audio of a phone interview followed by the finished feature that resulted: An episode of WPGU’s mini-documentary series, Probe.

Bonus 2: For completists, here’s the aircheck of the full 1974 hour—including ads and a newscast by WPGU anchor Maggi Pratt. 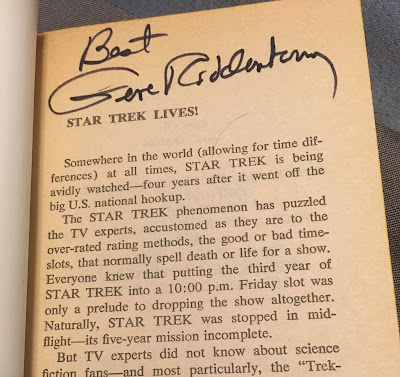 Check out even more of my conversations with thought-leaders through the years on this website, in Apple Music, on Spotify, via your favorite podcast player, and at Chicago Public Square.

And thanks to Dave Mausner for lending me that tape player.
Your turn: