As co-creator and first head writer of “Sesame Street,” he hatched songs generations have come to know and love — including Rubber Duckie, The People in Your Neighborhood and I Don’t Want to Live on the Moon. 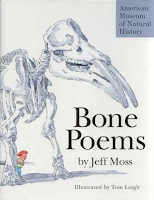 His work won him 15 Emmy Awards and an Oscar nomination (for the movie The Muppets Take Manhattan).

Jeff Moss joined me in 1997 — less than a year before his death, though I had no clue — to talk about and read excerpts from his then-new book of poems about dinosaur remains, Bone Poems.

But we also of course looked back to the origins of Sesame Street, and he revealed that he was hired for the show in 1969 to write scripts, not songs — and that songwriting wasn’t originally in plans for the show at all.

Hear that story and more in 17 minutes with Jeff Moss, a creative force gone from the world too soon.

Note: Before “Sesame Street,” Moss worked on another beloved show, “Captain Kangaroo.” Kids of a certain age may also enjoy my 1994 interview with the man behind the kangaroo, Bob Keeshan, who was none too fond at the time of Barney the dinosaur and the Mighty Morphin Power Rangers.

And don’t forget to sign up for free email alerts of new content on this blog.
Your turn: